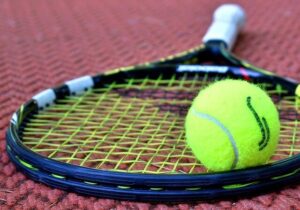 Martina Navratilova has the distinction of being the greatest Wimbledon champion of the Open Era, winning the Ladies’ Singles Championships a record nine times, including six years running between 1982 and 1987, and twenty titles in all in SW19. Indeed, Navratilova was the dominant force in women’s tennis in the late Seventies and the Eighties, to which her career record of 59 Grand Slam titles – 18 singles, 31 doubles and 10 mixed doubles – bears testament.

Born Martina Subertova in Prague, the capital city of the Czech Republic, on October 18, 1956, Martina Navratilova took the feminised form of the surname of her stepfather, Miroslav Navratil, when her mother remarried in 1962. Her left-handed, serve and volley style first attracted international attention when she led Czechoslovakia to a 3-0 victory over an Australian team, which included Evonne Goolagong, in the final of the Federation Cup in 1975. That September, after reaching the semi-finals of the US Open, Navratilova requested political asylum in the United States and was granted temporary residence. She was immediately stripped of her Czech nationality – although she became a Czech citizen once again in 2008 – and became an US citizen in 1981.

Interestingly, Navratilova won just three of her 18 Grand Slam singles titles before she turned 25. Throughout the Eighties, she shared a legendary rivalry with American Chris Evert. By contrast to Navratilova, Evert was a powerful baseline player with, arguably, the best two-handed backhand in the game. Initially Evert, who excelled on clay and hardcourt, dominated their encounters, but overall Navratilova beat her 43-37 head-to-head and, crucially, 10-4 in Grand Slam finals.